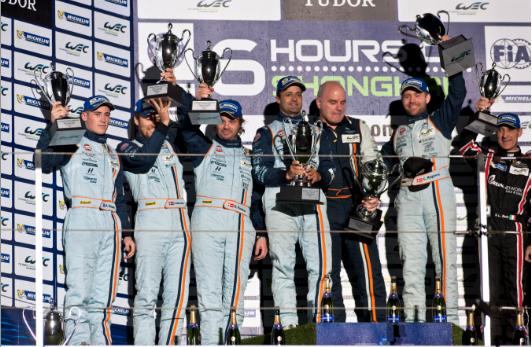 Gulf and Aston Martin Racing (AMR) took a fine 1-2 finish in the GTE Am category in the sixth round of the 2014 World Endurance Championship at China’s Shanghai International Circuit.

It is Gulf and Aston Martin Racing’s 16th category win in the WEC, meaning that Gulf-lubricated Aston Martins have now taken more victories in the World Endurance Championship than anyone else.

Gulf’s motorsport partner, Aston Martin Racing took double pole position with the #97 car of Darren Turner and Stefan Mücke heading the GTE Pro field away, while the #98 car of Pedro Lamy, Paul Dalla Lana and Christoffer Nygaard took the number one grid slot in GTE Am, narrowly ahead of the #95 car of Kristian Poulsen, David Heinemeier Hansson and Richie Stanaway

The race looked like it would be a similar story, with the Gulf #98 and #95 car battling for the lead and the #98 car holding a narrow advantage for the majority of the 6 hours, coming home just over a minute ahead of its sister car at the finish, to make it a Gulf lubricated 1-2 in GTE Am for the third race in a row.

In GTE Pro the #97 car looked set for victory until an engine problem forced it to retire with only an hour and a half of the race remaining. The #99 car of Alex MacDowall, Fernando Rees and Darryl O’Young came home fourth, only 30 seconds away from a podium finish.

This result brings Gulf and Aston Martin Racing closer to a 2014 World Championship title in both the teams and drivers category of GTE Am with two races remaining.

The next round of the World Endurance Championship takes place in Bahrain in two weekends’ time on Saturday 15th November.

The Right Oil For You